HTML5 is believed to be the Flash killer and will replace Flash in the future. Eventually those Flash-haters will become canvas-haters, so a canvas-blocking GreaseMonkey script will be useful (at least they think it will be).

I myself was making it for fun. I don’t think we should block any HTML5 tags anytime since it is a part of the web, just like I do not agree people blocking Flash. What is interesting is, seems like we cannot effectively block the canvas tag, which will be discussed later in this post.

I made the script blocks not only canvas tag but also video tag and audio tag. It is because Flash is going to be replaced by all the three tags but not only canvas. Video and audio can be as annoying as canvas.

CanvasBlock is tested on Firefox 3.6 on Mac, Firefox 3.5 on Ubuntu and Chrome on Ubuntu. Other platforms should works too.

I used haXe instead of writing pure JS. No big reason here, just to see if it is possible. Turn out there is no big difference from using JS, you just need to copy all the meta data to the compiled JS file. And the events listener need to be assigned by addEventListener instead of something like onclick = function ....

Detecting HTML5 tags is easier than detecting Flash objects. Firstly, the tags are standardized meaning you can simply use getElementsByTagName. For Flash objects you need to check the params of the object and the embed tags, which is a bit troublesome. Secondly, currently no one (at least not much ppl) is creating canvas tags on the fly, unlike for Flash the standard way is to use swfobject. So I can detect the tags once the DOM is ready, no need to wait for the execution of the page’s JS.

Replacing the tags and saving them for later retrieval is easy too. Using normal JS method will work.

The tags are blocked but…

The script is functional and I went to do some more testing. Blocking video and audio seems ok, but there is some problem of blocking canvas.

I went to ChromeExperiments and randomly picked one. You know what? The browser froze.

So, look like after I blocked the canvas, the JS on the page which is used to draw thing on the canvas originally, is still there trying to work on the canvas. And this become a big problem since I don’t know exactly which JS function is going to work on canvas, because different web page have different functions, so no way I can work on that. You can completely disable JS, but this is not a CanvasBlock should do.

Browser froze and an timeout message was shown after blocking canvas: 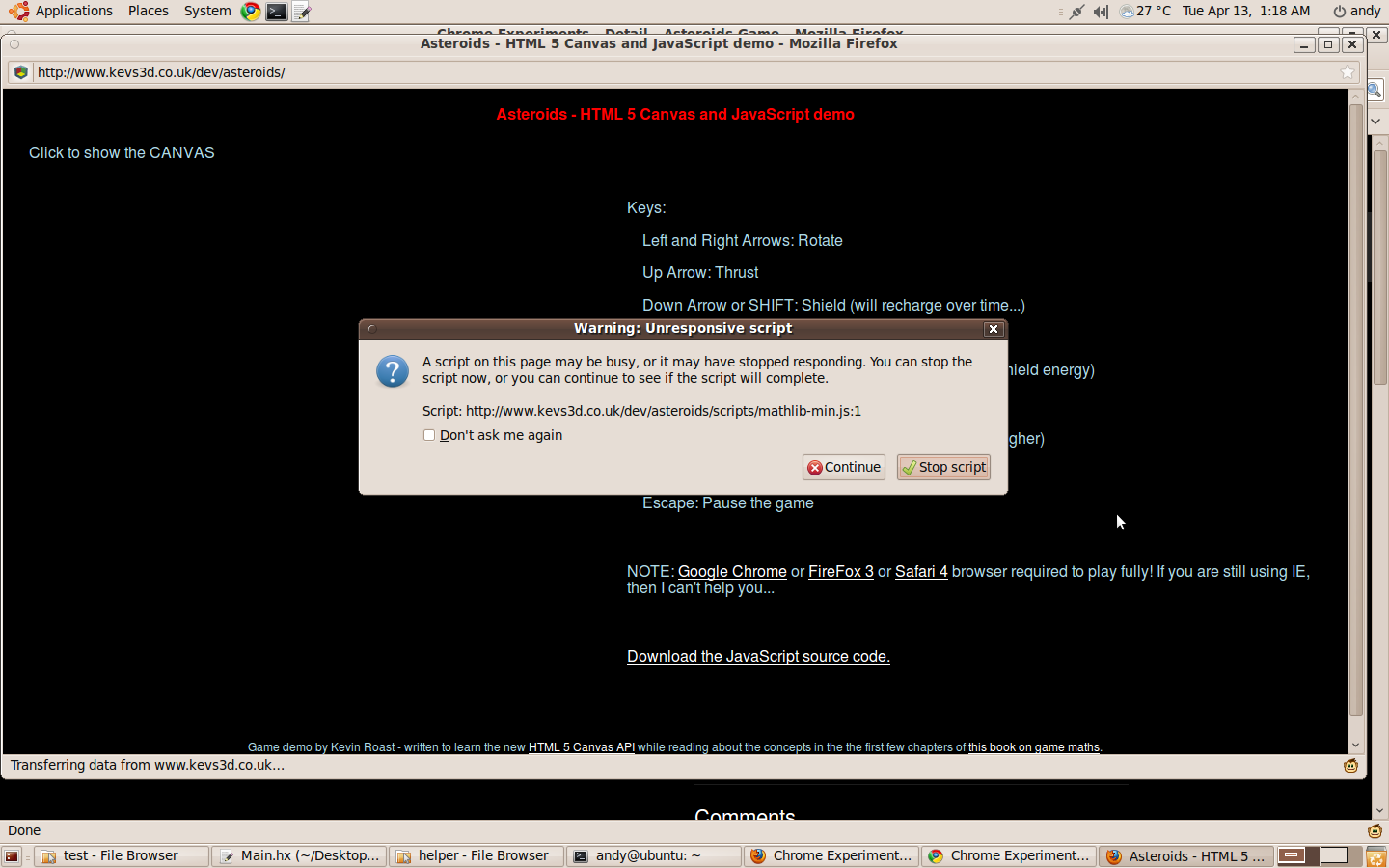 However, I have tested some more web page and they are ok with the blocking script. So maybe only some complex JS will have this problem. But anyway the possibility of freezing a browser is not a good thing.

No significant reduction on CPU usage

The remaining JS script  problem reminded me to test on the CPU usage. And the result is, blocking canvas does not bring significant reduction on CPU usage. See the following screenshots, which is using another Chrome experiment: 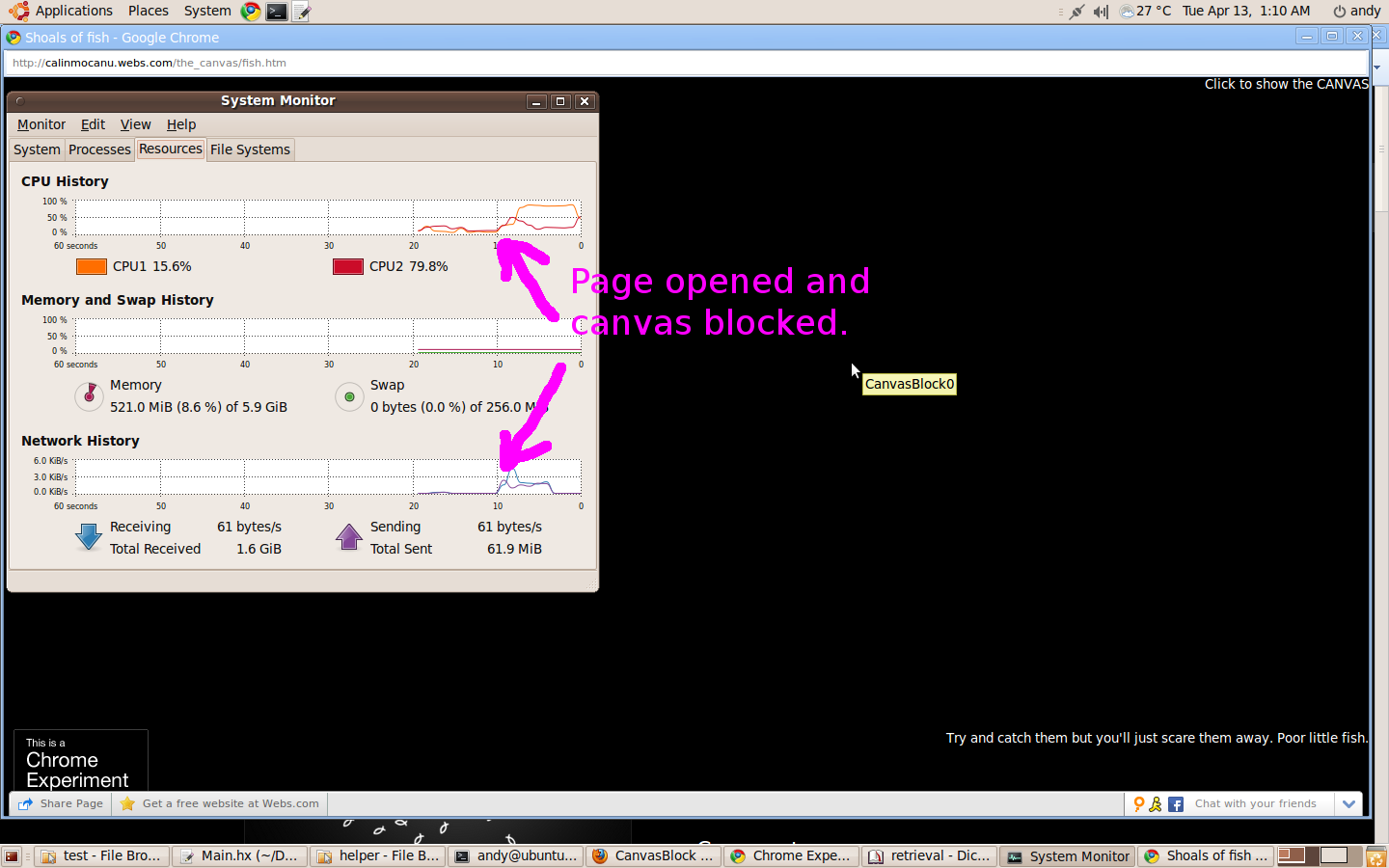 Clicked to show back the canvas. CPU usage rose even higher, but not much difference: 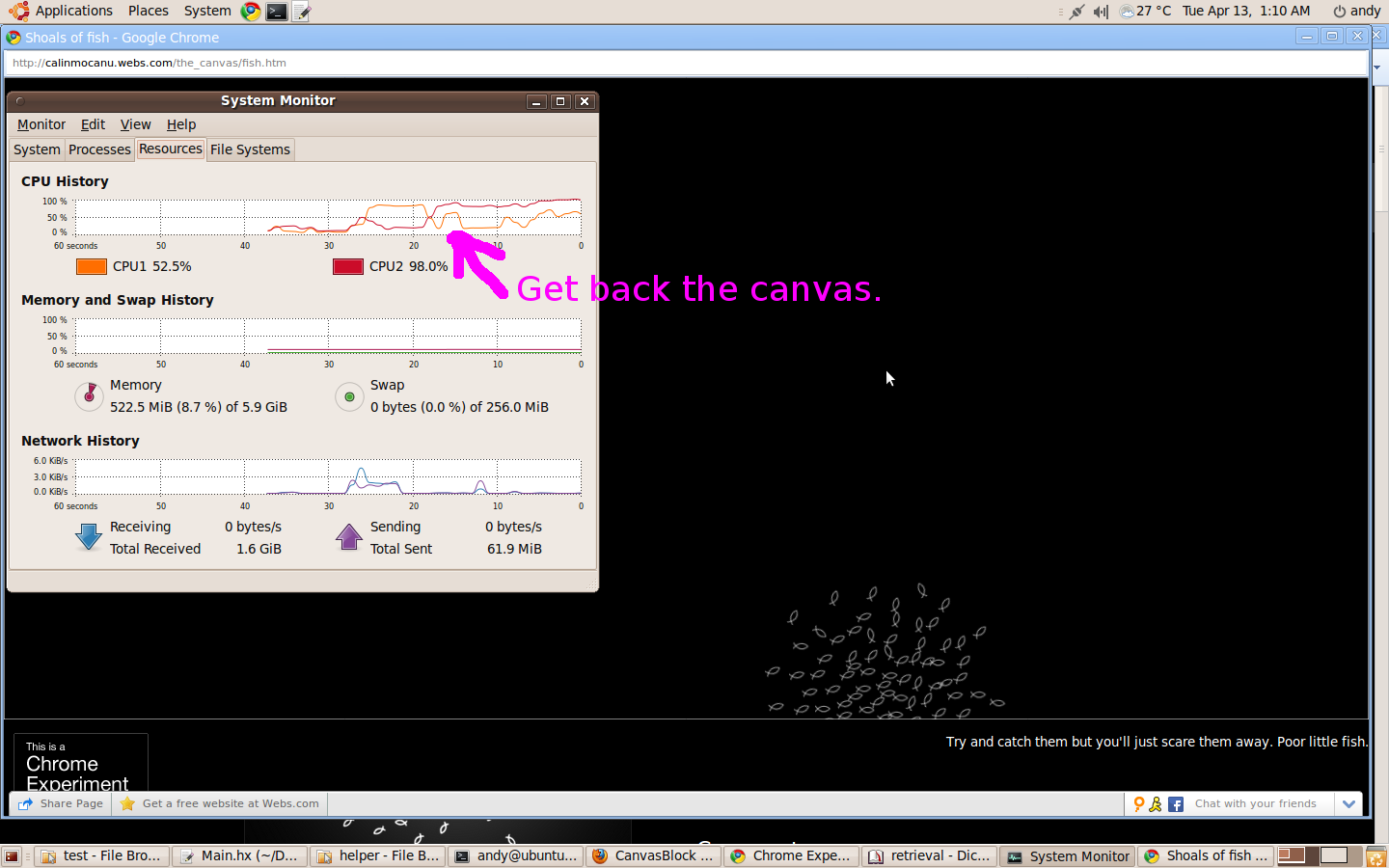 So what’s that mean? Again if I want to block the real CPU hog, I should block the JS with the canvas. But again, stated above, it is not possible to block the right function without blocking all JS.

Blocking canvas can only introduce little benefit on CPU usage but give you possibility of freezing/crashing!

Let’s look at Flash again. Flash can be blocked easily because ActionScript is included in the swf. Removing the swf from the page automatically removes the associated scripts. Also, usually JS does not control a Flash object so it is pretty safe to kick Flash out without dealing with the remained JS. From this point of view, seems that Flash is more user friendly than canvas, and HTML5 ads will be more annoying than Flash ads…

If you want to try, you may install the script from CanvasBlock’s page on userscripts.org.

You’re also welcome to get the haXe source from CanvasBlock’s Github repo.