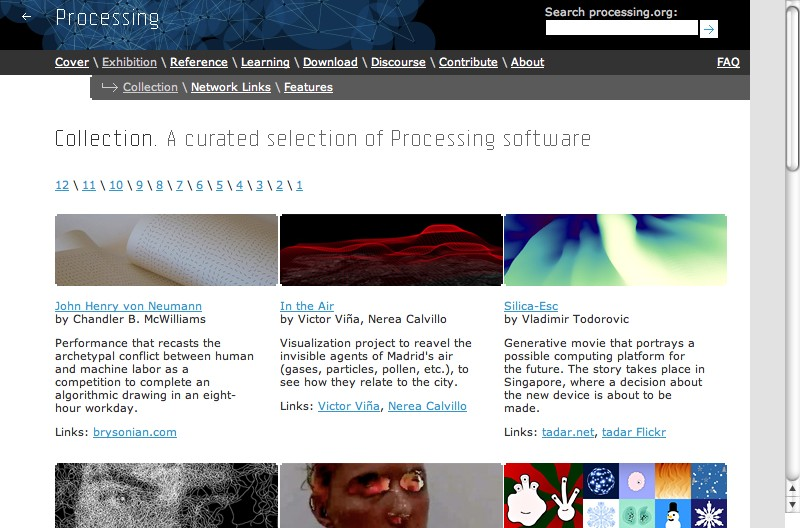 For interactivity/creative coding, except the graphical programming platforms like Pure Data, Max and Isadora, there are four major languages people are using:

The first two are developed mainly for the high performance nature of the languages, as real-time interaction and fancy visual effect is a main focus in creative coding, but they are somewhat difficult to designer/artist. ActionScript is mostly chosen for the friendliness of its API, tools and easy to distribute on the Internet, but it’s slow. Python is somewhere in the middle of the C++/Java and ActionScript: For once I heard that, if you want something faster than ActionScript but easier than C++, try Python. However I think programs created in Python are not easy to be distributed on the Internet, I mean, it cannot run in the browser. Also, Python’s syntax is less similar to the others (although it is still very nice :)).

I believe haXe has a very good potential to fit the gap. As we can use the friendly API of Flash to target C++ native code by using nme/neash. When we want to put the work on the Internet, simply compile it to swf or to HTML5 canvas with canvas-nme. We get best of both worlds.

What haXe is still missing

After intensively using haXe for a few months, I discovered a few things are missing in haXe. But they are all being improved in progress.

First of all, a real solid IDE. Yes, there are several IDEs with haXe plug-in you can choose: On Windows you have FlashDevelop, on Mac you have TextMate(I haven’t tried) and Linux there is Gedit.

FlashDevelop has build in support for haXe as well as ActionScript: 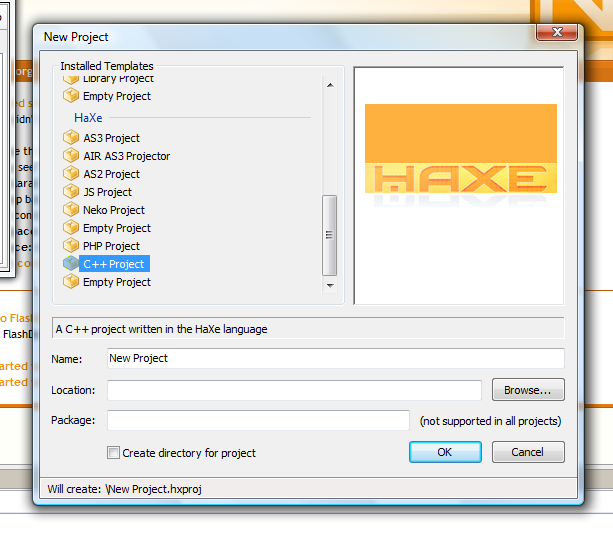 But if you want a cross-platform one, no, not yet. Cross-platform is important for creative coding as designers/artistes really love Mac. The amount of them using Mac is the same as those using Windows, if not more than. I myself spends a lot of time in all Windows/Mac/Linux, and I am sticking on Gedit on both Mac and Linux(Ubuntu) and avoiding to code in Windows… Gedit is usable on Mac but missing a few features like open terminal in the files panel or custom command with hotkey binding. And the UI is a little bit buggy, for example the code completion list can go off-screen…

There is eclihx, the haXe plug-in for eclipse. But it is really really buggy that I cannot get it fully functioning on any OS. Code completion is my minimal requirement for an IDE, but I cannot get that from eclihx, although it says it has this feature…

The situation is improving. FDT, which many people prefer it to Flash Builder, will have haXe support in its version 4. Since it is based on eclipse, it will be available on the three main OSes. And it is more feature-complete than all the IDEs I’ve tried at the moment. Although it is not open source, but open source developers can get a free license from them (hope the program will continue for version 4).

Moreover, discussed on the haXe mailing list, people are investigating the possibility of building a web based IDE, like Bespin from Mozilla. There is a Google group created over there but no actual development has started yet. Join it if you’re interested.

Number of libraries that designed exclusively for haXe is still small. There are quite a few pretty good ones though, like the data structure lib and 2D physic engine from polygonal lab (available from haxelib). But for interactivity/creative coding, libraries for vector graphics, image processing, hardware integration etc. are still missing.

I’m working on this area, trying to port some of the libraries from different languages or at least to create a haXe binding. I first ported Casa Lib, as CasaHx, which is a big collection of small classes. I’m also working on C++ target of Sandy3D, but still waiting for the next release of hxcpp and the release of nme2. hxSerial is my latest creation, based on ofSerial in OpenFrameworks, enabling serial port communication from haXe/C++ program, so that you can talk to Arduino, for example. Some ideas I will try later in the future (if I have time) will be:

Well, if you’re interested, feel free to work on those ideas and let me know your result/progress :)

The last one is a community of interactivity/creative coding in haXe. It is always a good thing if there are more people you can share your creations with and ask question from. Hope the community will grow after the above is improved :)