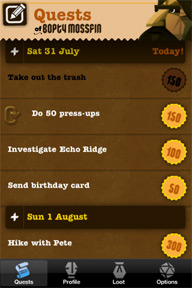 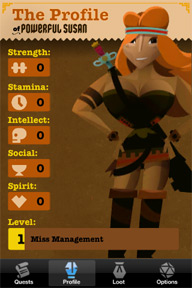 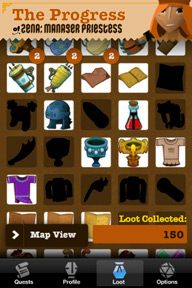 Epic Win is a game that runs in the Apple iOS platform (iPhone/iPad). It is a fusion of role-playing game, referred as RPG, and To-Do list application. Players define and input their own personal objectives in real life as game objectives. Once players mark an objective as complete, they will be moved forward in a quest map and may discover loot of game item. Experience points, referred as XP in the game, will also be given which will level up the player.

Simulation requires modeling the logic or behavior of the simulation target (Manovich, The Illusions). Epic Win modelled a typical medieval themed RPG world in several ways. Firstly, it modelled the game logic, which is to complete missions (objectives) to gain points and collect game items in order to level up. In RPG, when the player level up, the ability of the player will be increased. Since a game cannot directly increase the player’s abilities in real life, Epic Win modelled this with virtual abilities of a RPG character, e.g.. “strength”, “intelligent” etc. Secondly, a typically RPG game has a story line. Epic Win simulated it by taking the seemly non-related real life objectives, map onto a logical narrative experience. Lastly, typical RPG uses a fantasy world. Epic Win simulated the fantasy world by extensive use of heavily stylized media, including wordings, graphics, and sounds, in medieval theme. The game items contained in the loots which players collect, are also typical object in a fantasy world.

Epic Win presents to players a hyperreality that solving real life problems will be rewarded with XP and treasures that can enhance the virtual character of the player. Since such world presented by Epic Win does not really exist, it matches the definition of hyperreality, “A real without origin or reality” (Baudrillard). This character development, i.e. level up, is one of the basic fulfillments of playing RPG. The progress of player is simulated as an exploration in a virtual world. It corresponds to the story-telling part of a RPG, which can also encourage player to move forward, in terms of completing tasks, and immerse into the virtual world, the enhanced real world.

The process of adding playful game elements in real life activity, which is increasing popular nowadays, is referred as gamification. It is “the application of digital game design techniques to non-game problems, such as business and social impact challenges” (Werbach). I consider it as a form of mixed reality as well as a hyperreality. It is because its aim is clearly to trick users to enjoy non-game activity as they enjoy games, making the boundary of entertainment and work blurry. Al Gore summed up, “Games are the new normal.” (Tsai). People will increasingly treat real life as game, and work as entertainment. Even the military is using the same technologies and employing the same visual forms (Manovich, Kino-Eye and Simulators). Virtual awards, game media and game concepts are natural additions to daily life activity.

Gamification as demonstrated by Epic Win is an interesting example of “simulation” and “hyperreality”. There were players of Epic Win observed an uptick in their productivity (Rattray). Further scientific measurement of the relation between productivity improvement and game immersiveness would be useful.