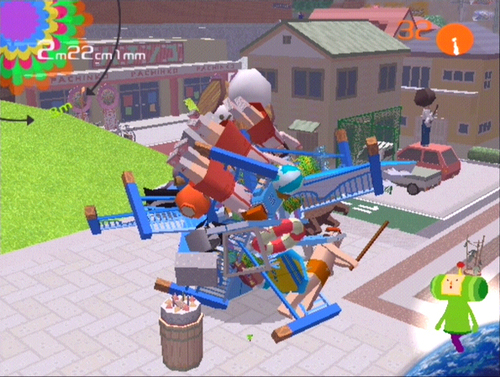 “Katamari” means clump; “Damacy” means soul. It is a game of collecting objects, creating a large clump of things. Player acts as the Prince, son of the King of All Cosmos, rolls a katamari that can pick up anything smaller than its size, forming a large sticky sphere. As more things get stuck onto the katamari, it grows larger and larger and eventually able to hold people, houses, islands or even planets.

The story in the Katamari Damacy game series is not an important part of it, but a “pretext for inspired weirdness” (Colgan). Basically it was the King of All Cosmos done something accidentally that destroyed part of universe, and the Prince was sent to roll up large clumps of things, in order to for example rebuild the moon, or to fill up a black hole. However its focus on interaction, the underlying logic or algorithm, can be seen as the narrative part of the work (Manovich, Database and Narrative).

There is a wide range of objects exist in the game scene, be composed as a fresh, relaxed, joyful hyperreality. Despite of the destructive act of rolling katamari around, the atmosphere remains fun and cheerful. It is made possible by the careful selection of background music (mostly in Jazz style), cute sound effects and graphics. The game levels are nice montages of playfulness and positive child memory, for instance playground, candy shop, theme park, sunny country park with rainbow etc. The game scenes start cluttered with objects. They are clearly more packed than their real world counterparts. For example in a bedroom there are a lot of snakes, books, toys that makes the game world a celebration of wealth and materials.

Rolling katamari to collect different objects is yet another form of art, a process of creating the player’s own montage. At the time of destroying or cleaning up the world, player is creating a piece of work that can be a new planet in the game world. Its seemly contradictive destruction and creation is the same as the practice of pastiche and quotation, “to select elements and styles from the ‘database of culture’” and “to put them together into new objects” (Manovich, The Logic of Selection).

Mentioned by its Japanese creator, Keita Takahashi, at Game Developers Conference, Katamari Damacy was a comment on consumerism (Welsh). On one hand, the ultra packed scene suggested the ideals of capitalism. Cleaning the scene up by rolling the katamari over can be seen as an act of subvert to “the culture of consumption and even the value of other video games” (Sino). It is because most of the video games nowadays, as a culture interface, reflected the real world’s favor of capitalism and/or consumerism. Classical examples are SimCity, Age of Empires, and their inspired variants, where player starts with a small plain area, develops into a large place that contains a large amount of artifacts. The “more to less” direction of Katamari Damacy is the opposite of the mainstream “less to more” progress. On the other hand, picking up objects by the katamari is also a metaphor of consuming the materials around us. Although there is a target size as the goal of each stage, player is encouraged in the game to roll as much and as large as they can. It is very similar to the concept of consumerism, that people are encouraged to purchase goods or service in great amount, often in excess of their basic needs. Having the theme of consumerism in mind, the delightfulness made up by the media elements in game seems to be compensation to the emptiness feeling after mindless consumption. Even Keita Takahashi “felt empty when the objects were gone” (Welsh).

Katamari Damacy is a good example of a video game being successful in the consumer market, also being an art piece that contains message and thoughts from the creator. It was recently acquired as one of the video games in the permanent design collection of The Museum of Modern Art (Antonelli).

Colgan, Mike. Review - Me and My Katamari. 18 April 2006. 3 December 2012 http://www.gamechronicles.com/reviews/psp/meandmy/katamari.htm.