Last month I’ve sent to the Haxe mailing list and Twitter a short questionnaire in order to find out what operating systems our community is using or interested in using, such that I can ensure there is enough installer or package support. I’ve also added some questions on the other aspects of how Haxe is used, e.g. is it being used in professional works, which compilation targets are being used or interested in using etc.

I took this chance to have some hand-on experience with the Haxe Python target. I always wanted to use Haxe for data analysis during my PhD study. However, I’m not aware of any statistics package available to any of the Haxe targets available at that time. The Python target was released too late for my thesis. So, for my PhD, I used just vanilla Python and R, which were being used for the statistics courses I attended. Another reason to use the Haxe Python target this time is that I wanted to present this data analysis as a demo project in my talk in PyCon HK 2015, which happened during the last weekend.

I have pushed all the data together with the Haxe code I used for analysis and graph-plotting to a Github repository. Feel free to play with it :)

I’ve collected 361 entries in about 2 weeks. After removing the invalid ones (people who just don’t know or not interested in Haxe) and the duplicated ones (people clicked submit twice, resulted in having entries filled with the same email address), there are 351 valid records. It clearly shows that our Haxe community is so active and cares so much about the development of Haxe. Thank you for all the helps!

The first thing I asked in the questionnaire is the experience on using Haxe, in particular is it being used for professional works. My hypothesis is that my questionnaire should reach more “serious” Haxe users and the ones who care to submit a response should also be the “serious” ones. The result meets my expectation and there are about half of the respondents using Haxe for professional works, as illustrated in the figure as follows: 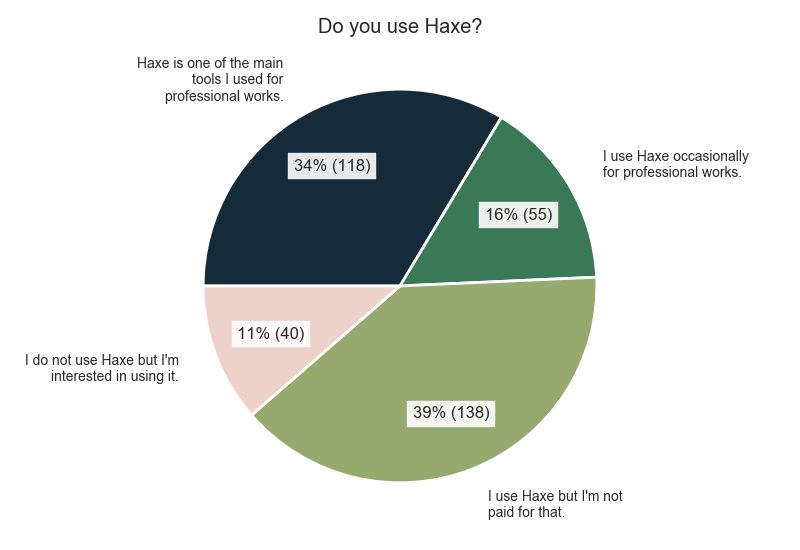 Having more than 160 professional Haxe users participated in this survey is pretty impressive to me.

So, what is our community creating? It has been well-known that Haxe is popular among game developers. It is so popular to a point that for once all the top three winners of the Ludum Dare game jam were all using Haxe… Here the second question asks what kind of things Haxe is being used or interested in using Haxe to build: 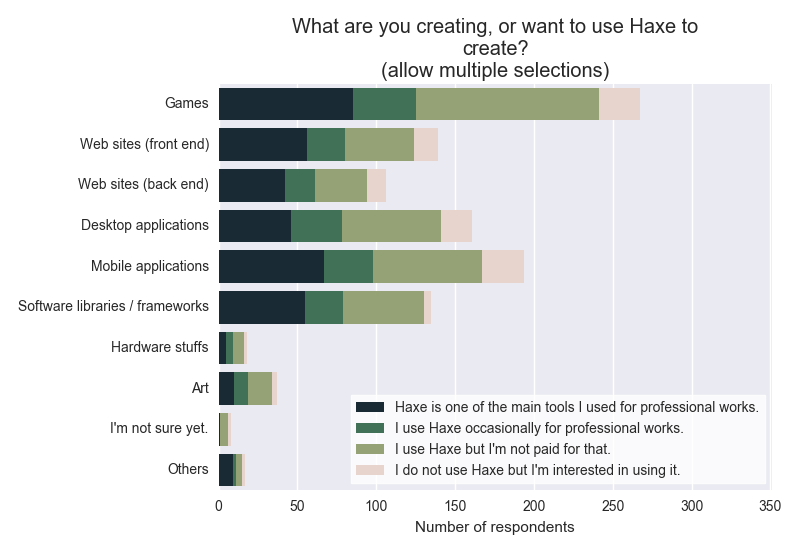 As expected, most respondents are making or interested to make games with Haxe. But other than games, there are also high interests in using Haxe for mobile/desktop applications, web sites, and even software libraries and frameworks. It suggests that Haxe is indeed a general purpose language and we cannot ignore the interests outside of game development.

The next thing is to find out which compilation targets are being used or are generating interests. Historically Haxe was developed as a replacement of AS3, so I know that there were lots of people using it to create Flash contents. But given HTML5 is the current hype so I suspected there is huge interest in the JS target too. The result is as follows: 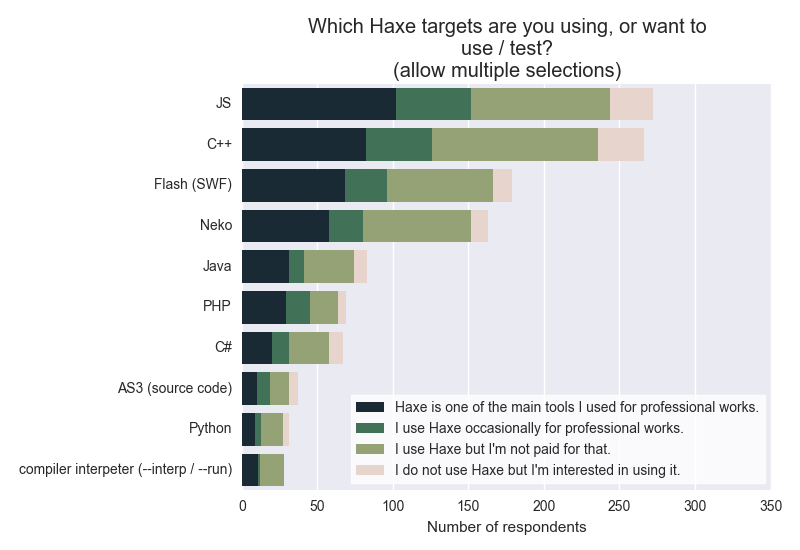 The interests in the Java, C#, and Python targets are relatively low and I personally think that they should deserve more attention from the community. It is because there exist a large amount of solid libraries in those languages. For the Java and C# targets, we don’t even have to write externs but simply add a line of -java-lib/-net-lib and we can make use of any Java/C# libraries. Maybe the lower interests are caused by the lack of documentation and usage example, which I hope they will be improved.

Another information that can be extracted from the same question is the number of interested target per respondent. Given being multi-target as the most prominent Haxe feature, I suspect Haxe users are using or interested in more then one target. The result meets my expectation: 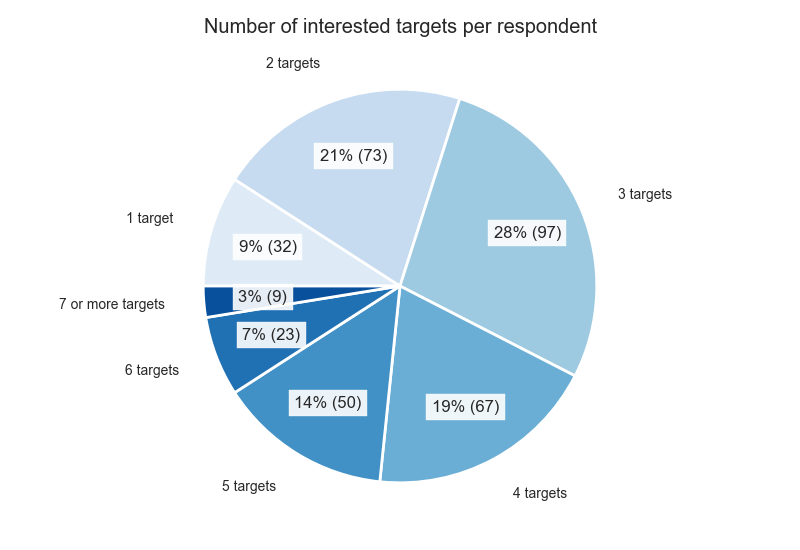 As shown above, over 90% of the respondents are using or interested in 2 or more targets. The result is pretty much a normal distribution and the mode is 3 targets.

We will then turns to analyze the development setup in the next question, which is to ask which versions of Haxe are the respondents using, or want to use / test. The result is plotted in the figure as follows: 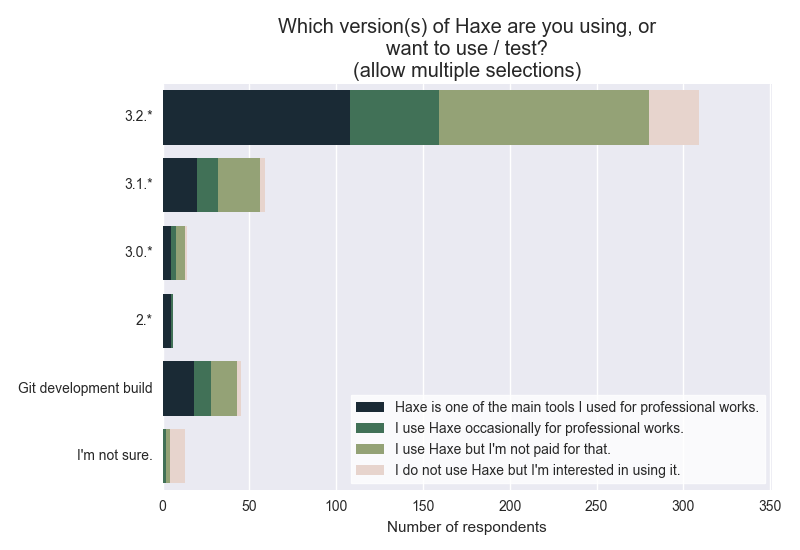 Another interesting view to the data is the number of interested Haxe versions per respondent: 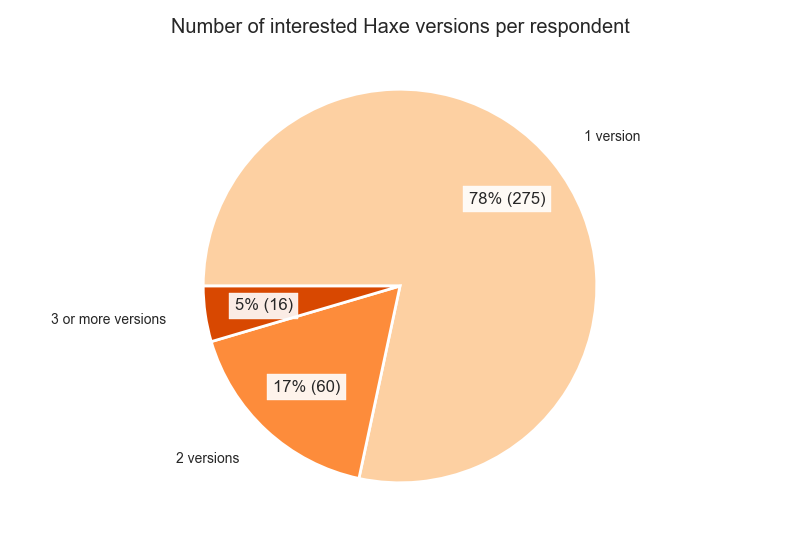 We can see that there is some interest in using more than one Haxe version (~20%), but the majority of respondents are interested in using only one version. That means it is not urgent to support installing multiple version of Haxe in a system, although it would be great to have a way to do so in the long run. HVM sounds promising although I haven’t tried. For testing purpose, one can easily setup a TravisCI build matrix with multiple Haxe versions.

For the installation method, I asked how Haxe was being installed: 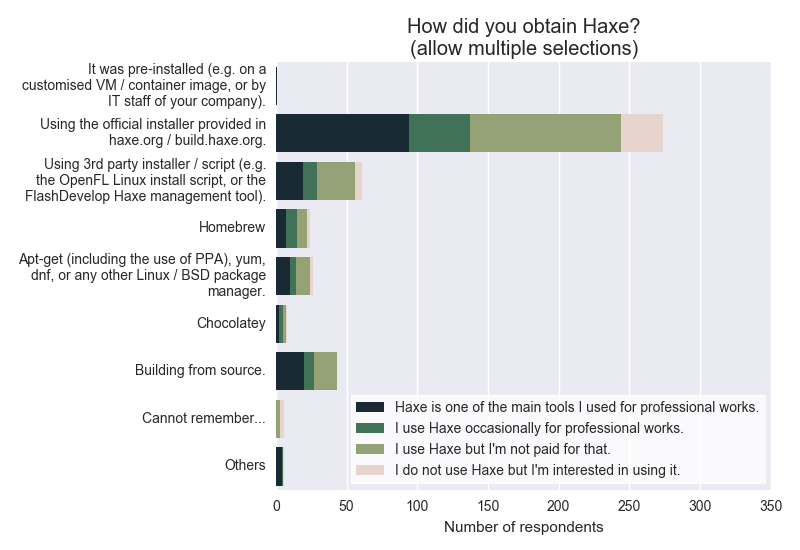 As shown above, most respondents used the official installer from the haxe.org web site. There are some respondents used the third-party installer or script, which I suspect it is due to the fact that the haxe.org web site doesn’t provide a installer for Linux and people resorted to using the installer script provided by OpenFL. Given we now have Linux packages officially maintained by the Haxe Foundation, I think the OpenFL installer script can be deprecated and the usage of Linux package managers will be much higher soon. Self-remainder: I have to go to update the haxe.org download page to provide the Linux packages info. 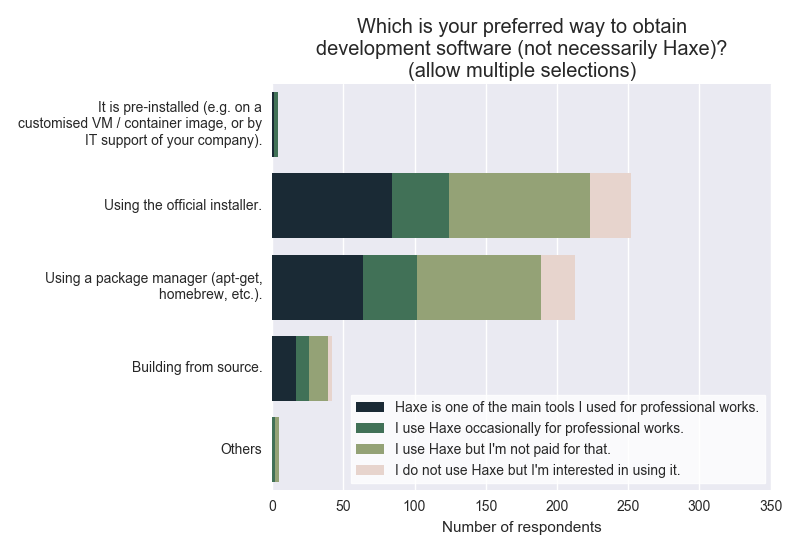 Let’s take a look at the OS families being used for Haxe development. Note that I’m investigating the usage of developer machines, which are the ones people install Haxe and do actually coding in. I’ve included the usual 3 major desktop OS families: Windows, Mac, and Linux/BSD. Out of interest, I’ve also added “mobile OSes” as the forth OS family, because I think mobile devices are popular and there may be people who want to code on a tablet. The result is illustrated as follows: 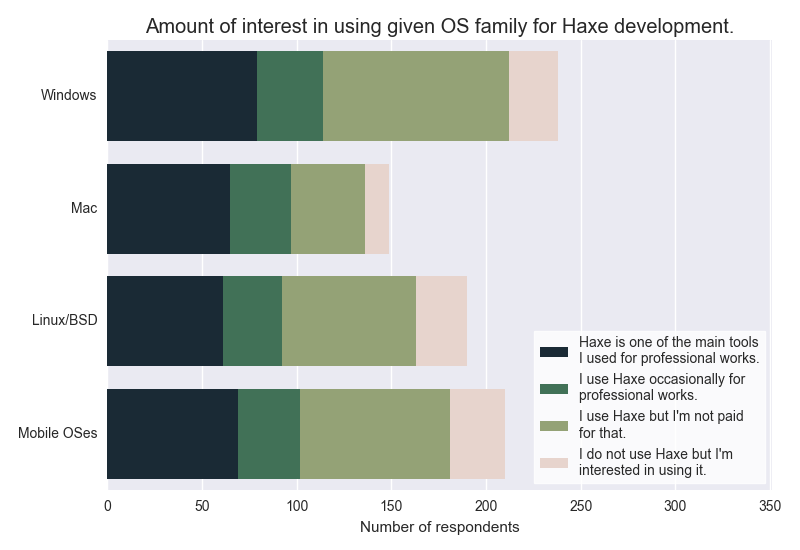 Surprisingly, the number of respondents who stated interest in using mobile OSes for Haxe development is higher than the ones of Mac and Linux/BSD. Turn out some people reported they had mistaken the question as the interest of developing for, but not on, the OSes. But still, even if we assume only half of the respondents understood the question well, there is still ~30% percent of respondents interested in developing on a mobile device!

The difference between Mac and Linux/BSD is also interesting. Overall, there is higher interest in Linux/BSD than Mac. But, if we only consider the respondents who use Haxe professionally (the green and dark green portions), the interest in Mac is slightly higher.

We then look into the interest in using individual versions of the OSes. The results for Windows and Mac versions are plotted as follows: 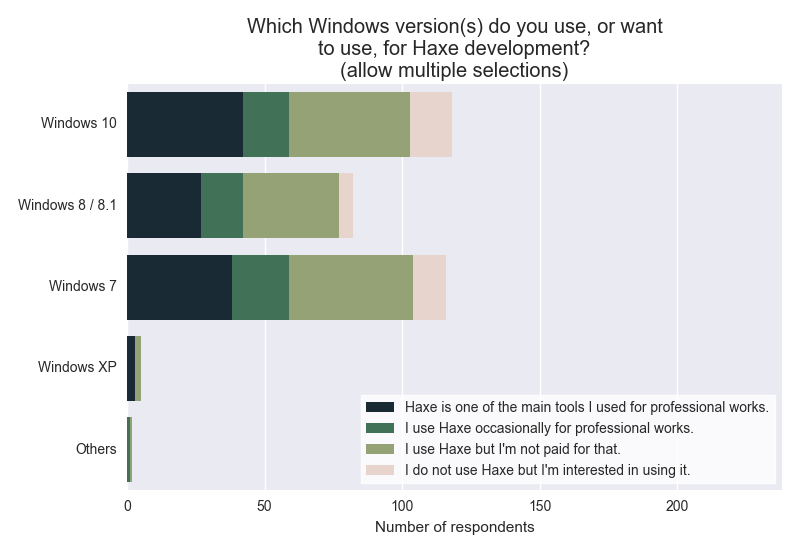 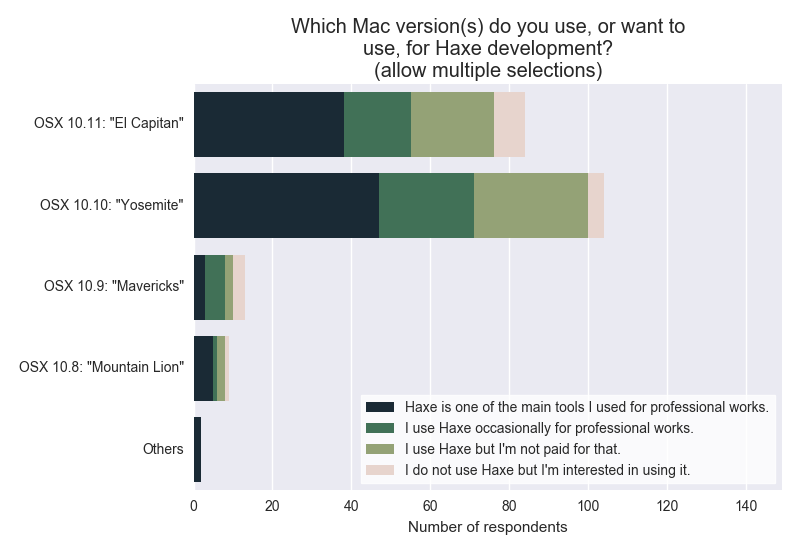 We can observe that most respondents are interested in using the latest three versions, but not the older ones. This will be a good information to know when considering installer OS version support.

For Linux/BSD, I asked for the interested distros instead of individual releases of each distro to reduce the number of options. The result is plotted as follows: 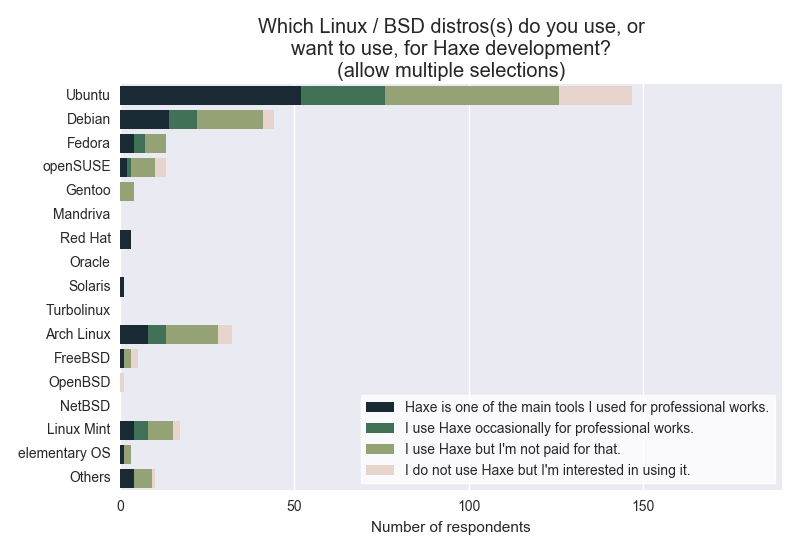 I know that Ubuntu is super popular. As shown in the figure, there is indeed high interest in doing Haxe development on it. My recent package updating effort already covered the two most requested ones here (Ubuntu and Debian, and in fact the PPA is also usable in Linux Mint). The distros that uses RPM are not very popular among our community, but I’ve covered Fedora and openSUSE anyway. I wasn’t aware of the popularity of Arch Linux, so this survey is proven useful to let me know about this. I’ve been told that there are nice packages existed in the Arch Linux AUR, and I will check and co-maintain the packages if possible.

Finally we come to the result of mobile OS versions: 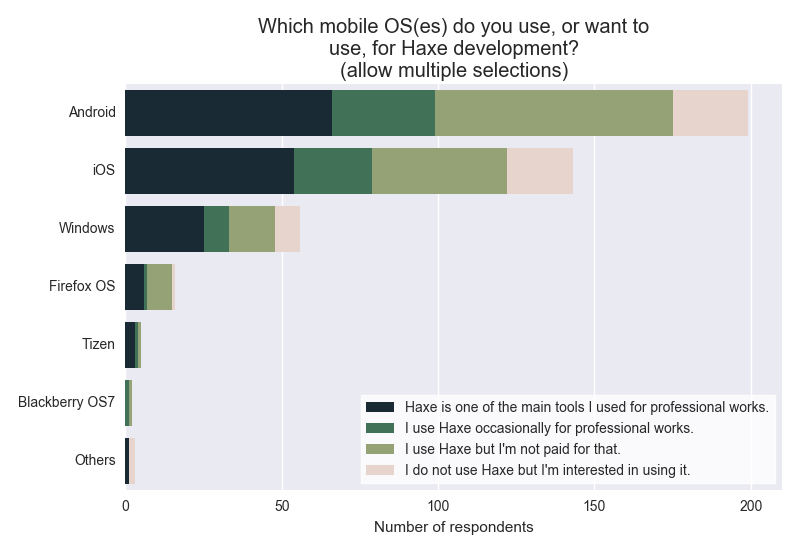 As previously mentioned, since there were respondents mistaken this question, it is safer to consider this result as the general interest but not development specific. If we take a look at the world-wide market share of the mobile OSes, we can observe that the two rankings are basically the same.

The survey result serves my purpose well. It verified the usefulness of maintaining the Haxe packages across different OSes. It also gives nice information for prioritizing improvements to the supports of different OSes, Haxe versions, targets, and application domains.

I think it would be nice to have this kind of survey once for every few months, to understand how our community is evolving and to dig out more interesting information.